When you get to town, pick up a free exhibit guide from any of the Trojan stores and businesses. The eye-catching brochure, designed by Troy-Hayner Center exhibition designer Leona Sargent, explains the project, includes a map and photo of each sculpture and information about each of the artists.

In addition to the outdoor sculptures, downtown businesses and organizations also display artwork from local artists and you can find information on this in the brochure as well.

This is the 10th year of the popular “Sculptures in the Square” event hosted by Troy Main Street every two years. The organization’s executive director, Andrea Keller, says public art helps attract residents of Troy as well as visitors from out of town.

Over the years, many of us have enjoyed Seward Johnson’s amazing lifelike bronze statues, casts of living people engaged in daily activities. In 2007 the exhibition focused on replicas of WACO fiberglass biplanes and in 2017 the exhibition featured the work of artist Gilberto Acecves Navarro, which featured 30 colorful sculptures of steel bicycles.

Sculptor Matt Miller’s giant metal slingshot, titled “Grandpa S”, is one of 20 pieces currently on display as part of “Sculptures in the Square” in Troy. CONTRIBUTED

Keller says the idea for this year’s show is tied to Ohio’s rich aviation history – the Wright Brothers, the National Museum of the United States Air Force, Troy’s WACO Air Museum, and the Armstrong Air and Space Museum. Artists were invited to submit designs that illustrate what “Take Flight” meant to them.

After 150 submissions were reviewed by the committee, 20 artists were invited to participate. “The response has been overwhelming and positive,” says Keller. “People really liked it. “

Some sculptures are realistic: an aviator holding an airplane, a bird in flight, a feather. Others are fanciful like “To Bee, or Not to Be” and “Wings”.

To exploreEmmy Watch: Chappelle and Janney vying for major awards this weekend

“I have moved around a lot and in my process of traveling and moving around the country, I started to pay attention to other migratory patterns,” she says. “I was inspired by birds that also migrate and when I took my first step from the West Coast to the Midwest it was (the red-winged robin) the first bird I didn’t recognize.”

As a petite woman, she says she learned to make parts compatible with her size and easy to assemble and refresh. “They’re painted steel and bolted together,” she explains. Her exposed bird is a few inches taller than her. 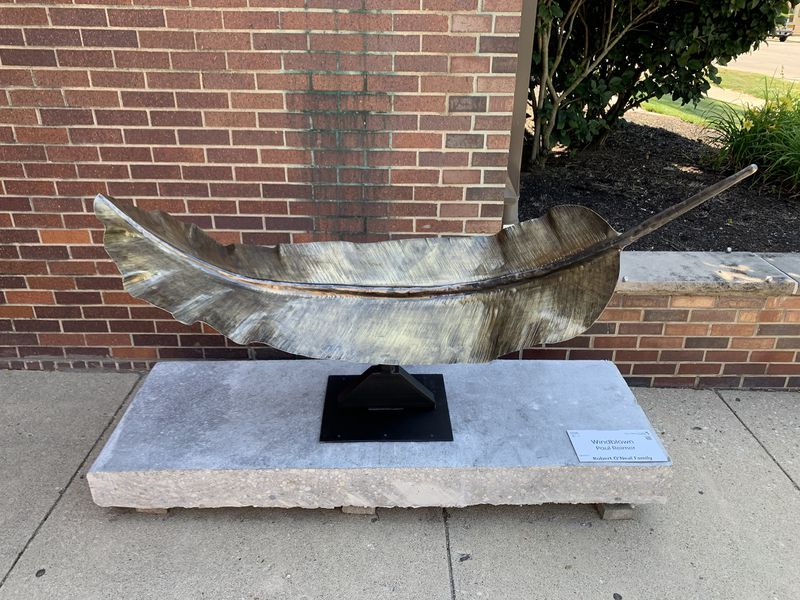 The day a friend and I visited, another artist had contributed to “Helios”, by Pamela Reithmeier from Toledo. A spider had created an intricate and beautiful web inside his sculpture! Helios was the Titan god of the sun.

Reithmeier says sometimes metal drives the sculptor and sometimes you have a certain idea in mind.

In the case of “Helios”, she started by scouring her barn and removing various pieces of metal. “The centerpiece with the sun’s rays was one that I found bent and damaged,” she says. “So I put it on two-by-fours and drove my car over it to flatten it. The sun’s rays were drops of other carvings; one of the pieces was a disc from a farm tool. These are just leftovers.

Once she had her design, it was all about grinding, sanding and welding. She didn’t realize until she installed it that the artwork would cast shadows as well. “Helios” is bright red. “It’s my mom’s favorite color and a lot of my work is positive and cheerful,” says Reithmeier. “There can be a lot of negative things in people’s lives so it’s fun when people can miss out on a piece of mine and it makes you smile.” 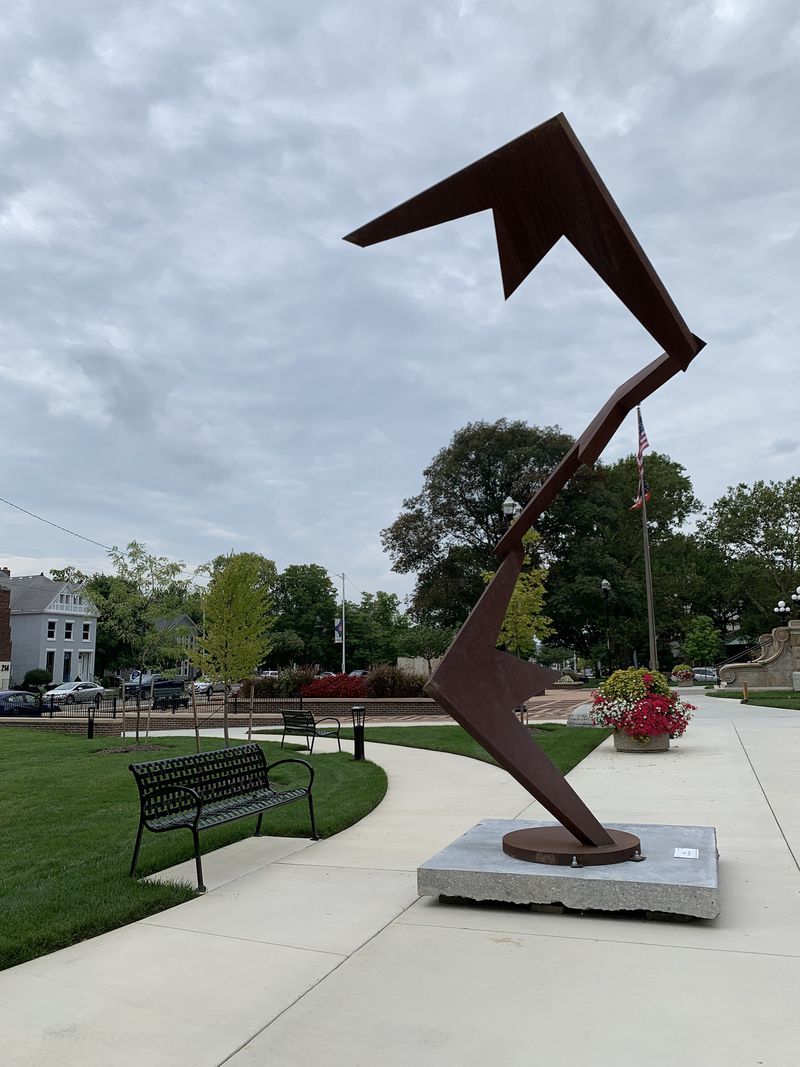 Most sculptures require some contemplation.

In “Dare to Dream”, artist Kevin Lyles reproduced a 300 pound steel anvil. “My sculpture is actually a flying anvil,” says Lyles, who teaches art at the University of Rio Grande in Southeast Ohio and says he always teaches his students to push the boundaries. For his flight sculpture, he was inspired by a book about the Wright brothers and everything they had to go through to fulfill their dreams.

Most of the sculptures are for sale with prices ranging from $ 1,800 to $ 25,000. If you would like to purchase one, contact Keller at [email protected] and she will put you in touch with the artist.

In addition to the Sculptures in the square, local artists were invited to submit works of art to be displayed in the businesses and shops of Troy. Pictured is artist Darren Kall with one of his line pattern series. CONTRIBUTED

Stop by downtown businesses and organizations to see more art from local artists.

At the Troy-Hayner Cultural Center you will see floral paintings by Meggan Klein. “I think of my art as something I do that’s really in the moment,” she writes.

You will see works by Trojan artist William E. Smith III at Haren Market (a good place to buy lunch) and outside the Troy Hospital in Kettering Health. His sculpture “Flying Machine” has a wingspan of 15 feet and is a half-scale interpretation of the “Flying Machine” by Leonardo da Vinci. A number of his “Birds in Flight” mixed media paintings also nestle at Haren’s upper level.

At the Mayflower Arts Center, which also houses a historic movie theater, you can see a number of Darren Kall’s line pattern paintings. You may have seen two of his largest line paintings at the Brookville branch of the Dayton Metro Library where he was commissioned to create new art.

To exploreAgape for Youth fundraising gala to honor its founder

Kall says the series explores the versatility of intersecting lines. “Each painting has intersecting lines and explores a unique aspect of the relationships between variations in color, size, width, curve, pattern, angles, transparency, density, continuity, confinement, light, contrast, technique and other elements, “he explains. . “I see it as a motif to express a wide variety of moods.”

Many people, he says, buy line pattern paintings for their decorative qualities. For this exhibition he created a number of smaller paintings. The series is priced from $ 50 to $ 600.

HOW TO GET THERE

What: “Sculptures in the Square” with 20 “Taking Flight” sculptures and works of art by local artists

When: Until October 4. The outdoor sculptures can be seen at any time. Interior artwork can be viewed during the opening hours of each organization.

Or: Troy’s Square and town shops.

More information: troymainstreet.org and podcast interviews with each artist are available on Spotify.